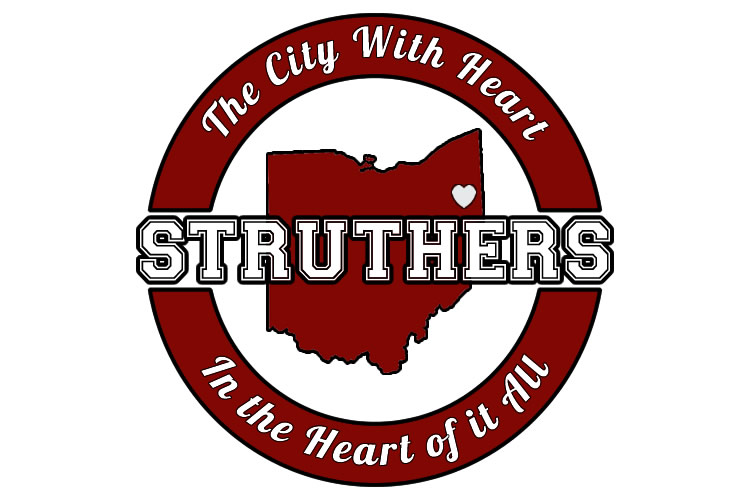 
Once a steel town, Struthers has diversified into an urban community with a mix of residential, commercial, industrial and recreational areas to meet different needs.

Struthers is located on the banks of the Mahoning River about 4 miles (6.4 km) west of the border between Ohio and Pennsylvania. As of the 2010 census, our population was 10,713 spread out over 3.74 square miles.

The History of Struthers

Welcome to the City With Heart in the Heart of it All!

We're so happy you chose the City of Struthers to call "home"! Let's get started making you an official resident!

First things first: Let's get you registered as a resident by clicking HERE.

Now that you're registered, there's a few things you should know:

In accordance with the codified ordinance of Struthers, section 171.13 Imposition of Tax, the following are required to file a tax return with the City of Struthers: On all salaries, wages, commissions and other compensation earned by residents of the City over the age of 18

Pursuant to Struthers Codified Chapter 1385, effective January 1, 2019, application is hereby made to register the following rental units for occupancy in the City of Struthers.

Once completed, you will receive an invoice via email for the registration fees.

For the purpose of updating the files of the City of Struthers Tax Department, please fill out this online questionnaire. Once received, the Tax Department will email you your City File ID for your records

The History of Struthers

Prior to the year 1800, the section of this valley which is now Struthers was almost completely virgin forest and flower studded meadows. After each winter another spring would green the forest crowned hills, and flowers, planted by unseen hands, would decorate the sloping meadows in between.

On August 30, 1798, John Struthers, from Washington County, Pennsylvania purchased from Turhand Kirtland 400 acres of Poland Township land. This tract is now the present site of the city of Struthers. Struthers settled on his new land on October 19, 1799, and his log cabin, which was the first home in this district, according to reports of early settlers, was built on the site of the old parsonage of the St. Nicholas Catholic Church, which is now called Lowellville Road.

In 1800 Struthers built a grist mill on his property, the first in Poland township and later added to this a sawmill. These of course were built on Yellow Creek, at the lower end of his property, because of the available water power. It was probably because of this natural facility that Struthers selected the site of his land.

The title of our community celebration has been aptly chosen for Struthers, Ohio, really and truly is "the cradle of steel west of the Alleghanies". The first successful iron works in America were built on Saugus Creek, about ten miles from the present site of Boston, Mass., in 1640. This industry grew by leaps and bounds and moved ever southward along the Atlantic seaboard until it reached the present state of Pennsylvania.

After reaching its southernmost point, the industry started westward and followed the migration of our early pioneers, across the mountains toward freedom and into the path of the setting sun.

This iron industry, The forerunner of America's great steel industry, probably contributed more than any one thing to the winning of freedom for the original thirteen colonies. As migration westward and the settlement of our frontiers moved ever forward, these iron works furnished the tools, plows, wagon iron, pots, kettles etc., which were so necessary to the conquering of towering forests and limitless virgin lands.

As the industry moved on, these iron works of our pioneer fathers, were built in forest glades where the Indians still lurked. In 1803 the first of these furnaces was built on Yellow Creek adjacent to John Struthers' 400 acres. This was the first blast furnace west of Pittsburgh, Pennsylvania.

Events during the period of the construction of this furnace prove that the Indian problem was a serious one to these early settlers. The settlements in the Mahoning Valley actually faced many of the horrors, of frontier life. Most of these horrors could be traced to trouble with hostile Indians, who still roamed the forests along the Mahoning River. In fact on Sunday, July 20, 1800, two Indians were killed near Youngstown in an altercation with white settlers. As late as 1804 an Indian was tried at Youngstown for killing a white settler at Salt Springs.

As civilization pushed ever westward living conditions in the new settlement on Yellow Creek became less hazardous. The struggle for existence however, became less rigorous only with the coming of conveniences made possible by the growth of the iron industry and the development of transportation facilities.

The little furnace on Yellow Creek was constructed by Daniel Eaton. Its capacity was but a few tons a week and the entire output was used in the casting of pots, kettles and sad irons for the new settlers. No casting of products was done on Sundays and the iron on these days was formed into small pigs, which were then transported to the Pittsburgh bloomeries where it was converted into bar-iron.

About 1806 John Struthers also saw the possibilities in the iron business and about this time he associated himself with Robert Montgomery and David Clendennin in the erection of a second furnace about a mile and 2 half down Yellow Creek from Baton's furnace. Later on this partnership purchased the Eaton stack.

The small Struthers operations prospered until 1812. The war of 1812-14, called away the available workmen and left the furnaces idle. The Eaton-Struthers furnaces never operated again and John Struthers emerged from the havoc of these war years with his industry and his lands gone.

The little settlement on Yellow Creek remained almost dormant for more than sixty years. The Ohio Canal gave impetus to the growth of Lowellville and Youngstown but it remained for the building of a railroad to bring Struthers to life.

In 1865, Thomas Struthers, son of John Struthers, who had located in Warren, Pa., bought back the old Struthers homestead, or much of if, and laid out the village, to which he gave his family's name. Two rail-roads were built through the site of the little village, a post office was established in 1866 and in 1867 industry was revived through the erection of a saw mill.

In 1869 Struthers again became an iron producing community with the construction of the Anna Furnace by the Struthers. Iron Company. In 1880 there was added the sheet mill plant of the Summer's Brothers Co., and in 1888 the plant of the J. A. and D. P. Cooper Gear Company.

With all these activities Struthers still remained a village of less than 1,000 inhabitants, after 100 years had elapsed since John.Struthers built his first cabin and erected the sawmill and grist mill on Yellow Creek. In 1899 Struthers was brought into closer communication with Youngstown and the upper Mahoning Valley by the completion of an interurban electric line.

The erection of this plant, near the 100-year-old settlement gave Struthers a growth impetus which demanded civic action. Throughout the years the village was an unincorporated part of Poland Township, but the need of a better government became apparent and in November 1902, Struthers became a formally incorporated municipality, with an historical background of which it could well be proud.